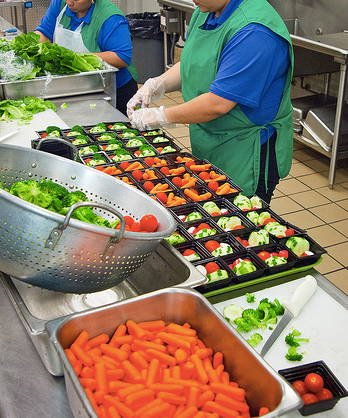 Foodborne illnesses are more commonly referred to as food poisoning. The telltale signs are excessive vomiting, stomach cramps and diarrhea. While you might go to the doctor if you are severely hydrated, you generally won’t need a doctor to tell you that you have food poisoning – you’ll know.

Foodborne illnesses are caused by harmful bacteria or viruses. They are usually the result of poor hygiene, eating raw foods or incorrectly stored food.

There are 5 main types of foodborne illnesses and they are referred to by the Center for Disease Control (CDC) as “the big 5.” They are:

Salmonella is often caused by consuming raw chicken or eggs, but it can also come from raw milk and food vendors contaminating fruits or vegetables. The bacteria is killed by properly cooking food and pasteurizing milk.

The Norovirus type of food poisoning is the infection of the stomach and intestines (acute gastroenteritis.) It spreads quickly, either directly from person to person or through an infected person preparing food or drinks.

Campylobacter is caused by eating raw poultry or drinking contaminated water. It usually occurs in one person (isolated event) instead of a large group of people.

More commonly referred to as “staph infections,” Staphylococcus aureus is transmitted through food workers who already have the bacteria or through contaminated milk and cheeses.

When foods are prepped in large quantities and kept warm, such as in prisons or hospitals, the foods are ripe for growing this foodborne bacteria. It is caused by unsafe food temperatures.

Meat, dairy and cooked vegetables are three common foods that are susceptible to bacteria growth if not cooled correctly. Buffet restaurants, hospitals and other institutions where food is prepared but not eaten immediately are required to hold hot foods at 135 degrees or hotter and cold foods  41 degrees or colder.

Many people incorrectly believe that heating any food at any temperature will kill the bacteria that causes food poisoning. However, not all foods cook at the same temperature. When cooking meats, especially in restaurants, the time and temperature guidelines should be followed to prevent foodborne illnesses from spreading.

This common cause of food poisoning related mostly to unapproved suppliers who circumvent food inspection regulations. However, it can also apply to that fruit stand on the corner. If you do purchase food from farmer markets, avoid purchasing meat products and thoroughly wash all fruits and vegetables.

Cross contamination is contamination from one area being transferred to another. It is generally used in reference to raw poultry, but it can also apply to kitchen utensils or equipment. Storing cooked foods under raw foods in your fridge is cross contamination waiting to happen.

The #1 cause of foodborne illnesses is poor personal hygiene. The failure to wash your hands after using the restrooms or coughing into your hand when you have a staph infection or a stomach flu are common ways harmful bacteria’s are transferred through food.

Norovirus is the most common type of foodborne illness. It is often referred to as the stomach flu. It is transmitted from the feces to the mouth by drinking contaminated water or coming in contact with someone already infected.

Simply washing your hands with soap and water isn’t enough. Most people don’t even do that correctly. Wet hands should be lathered with soap for at least twenty seconds before rinsing the soap off and drying your hands. Washing your hands and staying home when you’re sick are two easy ways to avoid causing a foodborne illness outbreak.