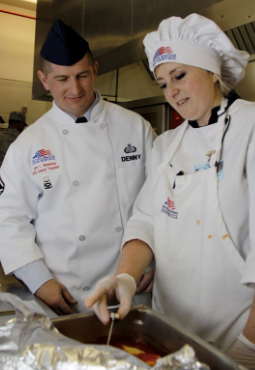 When going out to eat or cooking at home, most people don’t think about the harmful bacteria or viruses that can be transferred to the food they’re about to eat. They don’t think about it until they spend the rest of the night in the bathroom or in the hospital.

While the majority of people with foodborne illness recover within a few days, there are some cases where it can lead to death. Movies can make food poisoning look funny but it can be very serious.

What is a Foodborne Illness?

Foodborne illness, also called food poisoning, is an infection of the gastrointestinal tract. It is caused by ingesting foods that are contaminated with bacteria, parasites or viruses. The most common symptoms include vomiting, diarrhea and stomach pain. More serious symptoms can include blurred vision, paralysis and death.

While there are several different types of germs that can cause foodborne illnesses. The top 5 most common are:

Norovirus – the most common form of food poisoning, it is a result of ingesting feces through food or water.

Salmonella – this intestinal infection is caused by eating raw foods, such as eggs, meat and poultry.

Clostridium Perfringens – cooked food left out at room temperature is the main culprit for this bacteria growing on foods.

Campylobacter – raw poultry is most often the cause of this bacterial infection. It can even occur on organic or “range-free” products.

Staphylococcus aureus – also known as “staph” infections, this bacteria is often the result of poor hygiene, particularly not washing your hands after using the restroom.

Each foodborne illness has its own symptoms and treatments. Most symptoms include vomiting and will last a few days.

5 Most Common Causes of Foodborne Illnesses

Foodborne illnesses can be caused by many factors, but the top 5 common causes are:

Raw foods, especially chicken and beef, contain pathogenic bacteria that can cause foodborne illnesses. The bacteria go dormant when the food is placed in the freezer, but cooking is the only way to kill the bacteria. A probe thermometer is needed to check the temperature of the food to ensure it’s reached the proper cooking temperature.

The minimum acceptable temperatures when cooking food are:

Holding temperatures apply to the food service industry where food is often prepared ahead of time, such as in buffets, hospitals, schools and catering companies. Once cooked to the proper cook temperature, the food must be held at a certain temperature to minimize the risk of the bacteria in the food growing or reproducing.

Refrigerated food must be held at 41F or below. Common cold storage methods are walk-in coolers, cold top tables, refrigerated trucks or foods held on ice. Stored cold food should be temperature checked every 2-4 hours.

Cooked hot food must be held at 135F or above. Steam tables, crock pots, and heating lamps are some methods used to hold warm food. As with cold food, warm food should be temperature check every 2-4 hours. Many restaurants require employees to keep a log of daily temperature checks.

Cold food at 41F and hot food at 135F. What about the temperatures between this range? That is what food service workers refer to as the danger zone. It’s where food is most often susceptible to growing bacteria and causing foodborne illnesses.

Cross-contamination is another term you hear a lot in commercial kitchens. It happens when one food is transferred to another via dirty utensils or contaminated equipment. For example, using the same knife to cut raw chicken and cooked beef.

The bacteria from food can stick to kitchen equipment, causing bacteria to grow. If the equipment isn’t washed after each use, the bacteria can easily transfer from one food to another. The meat slicer is a prime example of cross contamination. That’s why delis have use separate slicers – one for meats and one for cheeses.

Food service workers are often inadvertently responsible for foodborne illness outbreaks, through having poor personal hygiene or working when they are sick themselves. Many restaurants have a rule that employees who are having gastrointestinal illnesses must report it to their supervisor. If the worker’s symptoms indicate a potential outbreak, they are sent home so that customers and other employees aren’t exposed to the illness.

Improper hand washing is another huge problem in the service industry. Yes, there is a right way and a wrong way to wash your hands. The proper hand washing procedure is to wet hands under warm water, apply soap and vigorously scrub your hands and arms for 30 seconds before rinsing with warm water. A paper towel should be used to dry hands and to turn off the water/open the bathroom door.

Using gloves when working with food is a great way to combat foodborne illnesses, if the gloves are used properly. Hand should be washed prior to putting gloves on and any time gloves are changed.

Food purchased for use in restaurants or other commercial kitchens should be purchased from a reputable vendor that is regularly inspected. When purchased food arrives at your facility, it should be inspected to ensure it’s traveled in the proper temperature. Another way to help stop foodborne illnesses is to thoroughly wash any products purchased, as you don’t know whether it’s been contaminated en route or not.

Once an outbreak occurs, there are certain steps that need to be taken to control the outbreak to prevent more people from falling ill.

How to Prevent an Outbreak

Taking preventive steps is your first line of defense against foodborne illnesses. Your home kitchen isn’t regulated by food safety inspectors, so it’s up to you to keep your kitchen clean.

FoodSafe allows staff to record temperatures of food products from when they are first received off the truck at their site through to when they are served to a customer which significantly helps to avoid any foodborne illnesses or outbreaks.